Include and edit media in documents

How to include images, videos and PDF files in your documents and edit them directly in cioplenu

Written by Stefan Philipp
Updated over a week ago

The presentation of information via images and videos makes your documents more readable. On the one hand, this improves processing time and, on the other hand, prevents errors in the work steps, which increases the quality of execution. Therefore use visual elements in your documents to present processes and instructions clearly and comprehensibly. In addition, PDF files with drawings, for example, can also be integrated and displayed.

In this section, we show you how to include media in work instructions and checklists and link them to operations. You can insert media into your documents in the following three options.

As you are used to from other applications, you can simply drag & drop media into a document in the editor. Drag the media file from explorer to the dashed area under a workspace. It is also possible to insert several images at once in this way.

As an alternative to drag & drop, you can also upload media from your device or a (network) drive. An explorer window opens, allowing you to select the appropriate file(s). Newly added media will be saved in the library and can be added again at a later time. To do this, use the following option add from existing media.

Existing media are media that are already available in this document or in the global media store and are thus in the media library. Select one or more media-files that you want to add to the document. You can use the actions option to decide whether you want to create a new step for this or use it in one process step.

As soon as you uploaded the media file(s), they are already assigned to the corresponding process step or are available from the attached media for further use in other steps and operations. Within a step, media can be easily moved from one operation to another using drag & drop.

Distinction between global and local media

In cioplenu, a distinction is made between global media and local media.

Use and transfer of global to local media and vice versa

The Media tab within a document can be used to see the Status of a media. In this column, you can see directly whether the medium is used local or global.

A global media can be transferred to the local storage via the action Disconnect from Global. Local media can also be converted to global by using the Convert to Global actions.

Translation of the media name

If a document is created in several languages, the descriptions of the images are not automatically adopted and must be translated separately. If the original description is still applicable, it can be copied from one language to the other using the Language action in the Media tab of the document. If applicable, you can also select all media at once and copy the language.

To use images accurately in manuals and for instructions, you often need to crop, rotate, add shapes and text, as well as safety notes. With the integrated image editor, you can edit photos and graphics quickly and easily without having to resort to additional software. Since the changes are created on a new image layer, they can be easily changed again afterwards or removed at any time.

In the image editor you can insert any number of shapes, text elements and pictograms into the image and adjust their size, orientation and color.

In the upper left area of the image editor you will find the crop tool. Using the blue frame, you can select the section and adjust its size. Confirm the selection with crop.

Also in the upper left area of the image editor are the two arrows for left and right rotation, with which you can rotate the image 90 degrees clockwise or counterclockwise.

In the upper right corner of the image editor there is a smaller gray button with a counterclockwise circle. Clicking this will ask you if you really want to reset the image to its original state. Confirm with reset to reset it. Only when you click save will the current state of the image be saved.

If an image is used in several operations and you want to make a change, the following message appears. When saving, you can choose whether you want to create a modified copy for one operation or modify the image as a whole. 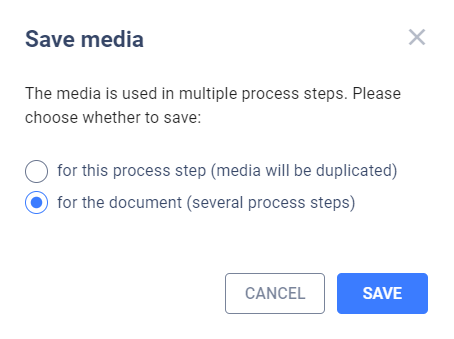 Videos can be easily cut to the right length in the Creator. This gives you the option of actually focusing only on the relevant seconds in the case of longer recordings. This saves time during later use and avoids ambiguities.

Did this answer your question?